For the first time this series, the top spot on the podium went to someone other than Kyle Peters or Jace Owen in the 250 Pro and 450 Pro Sport classes on both Friday and Saturday night. However, Peters came into the weekend knowing he could clinch the championship by just finishing on the podium in the aforementioned classes. Peters raced all weekend with an injured wrist and was unable to secure first place in any of his finishes, he was able to secure the AMA Arenacross National Championship title on Saturday night.
Round Ten of the 2020 AMA Kicker Arenacross Series took place on Friday, February 28th at the Maverik Center.

The 250 Pro Sport heat races kicked off the show on Friday and Gared Steinke came out hot and heavy and secured the first place spot, followed by Kyle Peters (2nd) and series newcomer, Geran Stapleton (3rd). Kyle Bitterman got the top spot in heat two, followed by series newcomer, Tod Bannister in second, and Darian Sanayei in third.

The first heat of the 450 Pro Sport class was won by Darian Sanayei, with Kyle Peters right behind (2nd) and Gared Steinke finishing third. Kyle Bitterman took the second heat ahead of Geran Stapleton (2nd) and Skyler Adams (3rd).

The 250 Pro Main brought a lot of action on Friday night. Bitterman came out strong and took an early lead in the race, but fell to the back of the pack after getting tangled up with a tuff block cover a few laps in. Sanayei took the lead at that point, but ended up going down in the middle of the race after making contact with the wall. Gared Steinke and Kyle Peters, who had been battling one another all race, then took the top two spots in the race and stayed within a second of one another until the very end. Steinke ended up securing the victory, his first of the Kicker Arenacross series. Peters came in second followed by Skyler Adams in third. This was Adams first podium finish of the series. Bitterman managed to make his way from the back of the pack to finish fifth overall.

The 450 Pro Main brought some drama yet again for Bitterman, despite a strong start off the gate. Bitterman went to pass a lapper at one point and almost took Sanayei down in the process, ultimately falling victim to the attempt himself and crashing in the process. At this point it was Sanayei’s race to lose, he held a few second lead for the remainder of the race over Peters, Bitterman and Steinke. Sanayei’s win in the 450 Pro Sport class was his first of the series. Peters came in second, followed by Bitterman in third and Steinke in fourth.
Round Eleven of the 2020 AMA Kicker Arenacross Series took place on Saturday, February 29th at the Maverik Center.

The first heat of the 250 Pro Sport class was all Kyle Bitterman. Bitterman came out strong and finished strong to secure the heat race. This finish would foreshadow the night to come for Bitterman. Steinke took second in the heat, followed by Peters in third. The second heat was championed by Geran Stapleton, racing in only his second round of the series so far. He finished ahead of Todd Bannister (2nd) and Darian Sanayei (3rd).

The 450 Pro Heats saw continued domination from some of the top series riders. Gared Steinke championed the first heat, ahead of Darian Sanayei in second and Todd Bannister in third. The second heat was won by Kyle Bitterman, followed by Kyle Peters (2nd), who continued to battle injury, and Brandon Breman, who took third place.

The 250 Pro Sport main was a continuance on the evening of the domination that was Kyle Bitterman. Peters mounted a charge to secure the top podium spot but could not contend with Bitterman. Peters ultimately finished in second place, followed by another solid showing from Darian Sanayei in third place.

The 450 Pro Sport main was again all Kyle Bitterman, he capped off a successful weekend by sweeping the pro classes in Round 11. Darian Sanayei finished his strong showing on the weekend with a second place finish, and Kyle Peters rounded out the podium coming in third. Peters also secured his AMA Arenacross National Championship Title after his two podium finishes of the evening.

This is Peter’s first AMA Arenacross National Championship Title. Peters was dominant throughout the entire AMA Kicker Arenacross series, securing 13 first place finishes throughout the season, and finishing in second or third in the remaining races.

Kyle Bitterman moves into second place in the series following his impressive weekend, ahead of Jace Owen by 44 points. Gared Steinke trails Jace Owen by six points in the series, and could move into third overall next weekend in Amarillo.
Rounds Ten and Eleven will air on Fox Sports 2 on Sunday, March 22 at 11:30 AM EST and Sunday, March 29th at 9:00 AM EST, respectively.

Round Ten, Eleven and the Overall Standings are as follows: 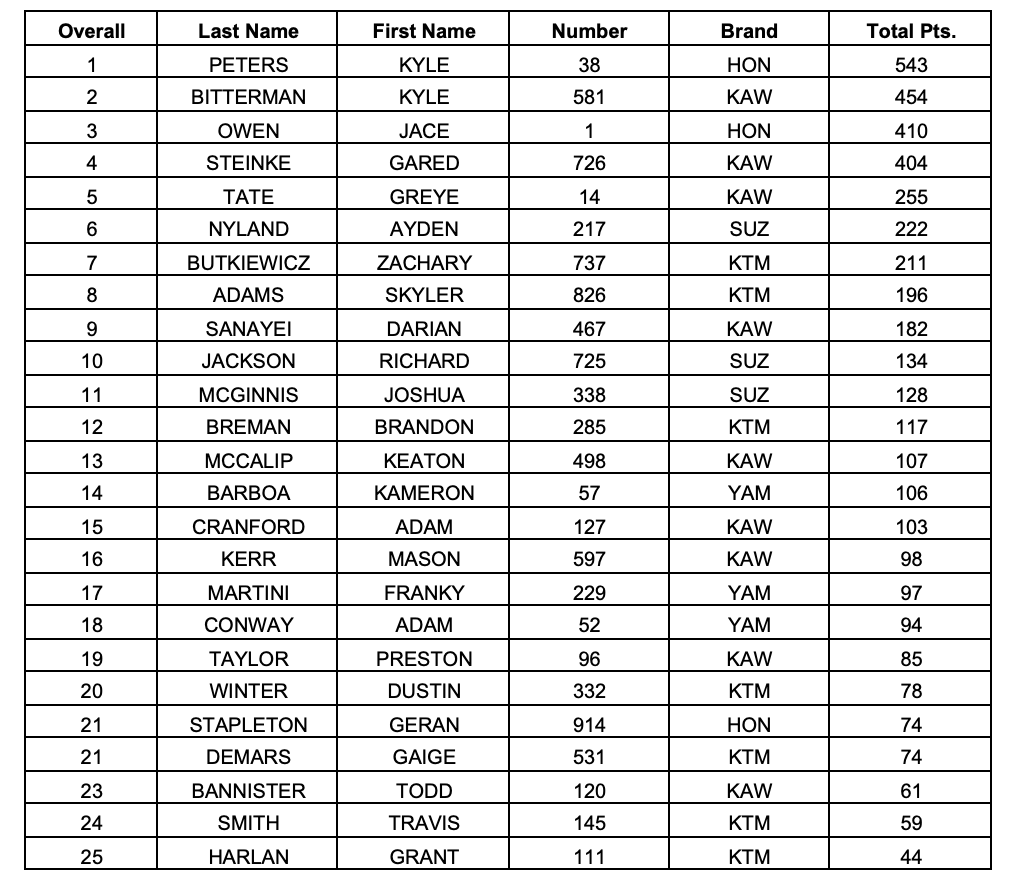 You can keep up with the latest updates via the following channels: