Warning: array_merge(): Expected parameter 2 to be an array, string given in /home/customer/www/quickthrottle.com/public_html/wp-content/plugins/connections/includes/Sitemaps/Sitemaps.php on line 142

Brea, CA (June 18, 2018) – The Autotrader/Yoshimura/Suzuki Factory Racing Team made its first stop on the east coast swing of the 2018 Lucas Oil Pro Motocross Championship. It was a monumental day for the team, as Justin Hill made his 450 National debut on the all-new Suzuki RM-Z450. Hill put in two outstanding moto performances in scoring fifth overall. Teammate Weston Peick didn’t let a first turn crash in the opening moto deter him from climbing once again into the top ten. He was on another level in the second moto, earning a season-best fourth place moto finish for sixth overall. In the 250 class, rookie Enzo Lopes had the speed and stamina to log a career-best, but bad luck held him back from reaching his goal.

Last week it was announced that Autotrader/Yoshimura/Suzuki Factory Racing Team manager Jeremy Albrecht made the decision to promote Justin Hill to the 450 class in the absence of the injured Justin Bogle. It was a brilliant move. Hill, who will move up to the 450 class on a full-time basis in 2019, looked like a natural fit on the Suzuki RM-Z450. The Yoncalla, Oregon native qualified sixth-fastest in combined qualifying, and rocketed out of the gate in the opening moto, riding his #46 RM-Z450 up to fourth place by the checkered flag. Hill backed up that performance by charging from eleventh to sixth in the second moto for fifth overall. He will again campaign the RM-Z450 this weekend at the Muddy Creek National in Tennessee.

Weston Peick traveled to North Carolina a week before the High Point National in order to acclimate to the hot and humid conditions. The move proved fruitful for the Southern California native, who dug deep in the opening moto to climb from thirty-fifth place to ninth by the checkered flag after getting caught up in a first-turn crash. Peick had much better fortune in the second moto, crossing the first turn in seventh. “The Viking” passed several riders on the way to a fourth place moto finish. In doing so, he scored his best moto finish of the National series thus far, and finished sixth overall. Peick sits a mere 12 points out of fifth place in the standings.

Brazilian sensation Enzo Lopes made great strides during the week break, setting personal bests with his RM-Z250 at the JGRMX test track and dialing in his starts. Unfortunately, Lopes’ effort at High Point was thwarted by bad luck. He went down several times, the last proving costly. Lopes suffered a fractured collarbone in the second moto and will need to take time off to heal

Justin Hill [450 Class, 4-6 for 5th Place] – “High Point was gnarly. You could not go around a single section without your teeth rattling out of your head. It was not my style of track. It was less about technique and more about powering through everything. I feel like Muddy Creek will be more my style. Historically, I haven’t done well at High Point, so I am happy to get out of there with a top-five finish. I had a brake issue in the second moto, so I wasn’t able to catch up to fifth place, but I was running a decent pace. My first 450 National taught me that I have to make things happen right away. I didn’t get the holeshot in either moto, but I tried to make good moves and work toward the front.” 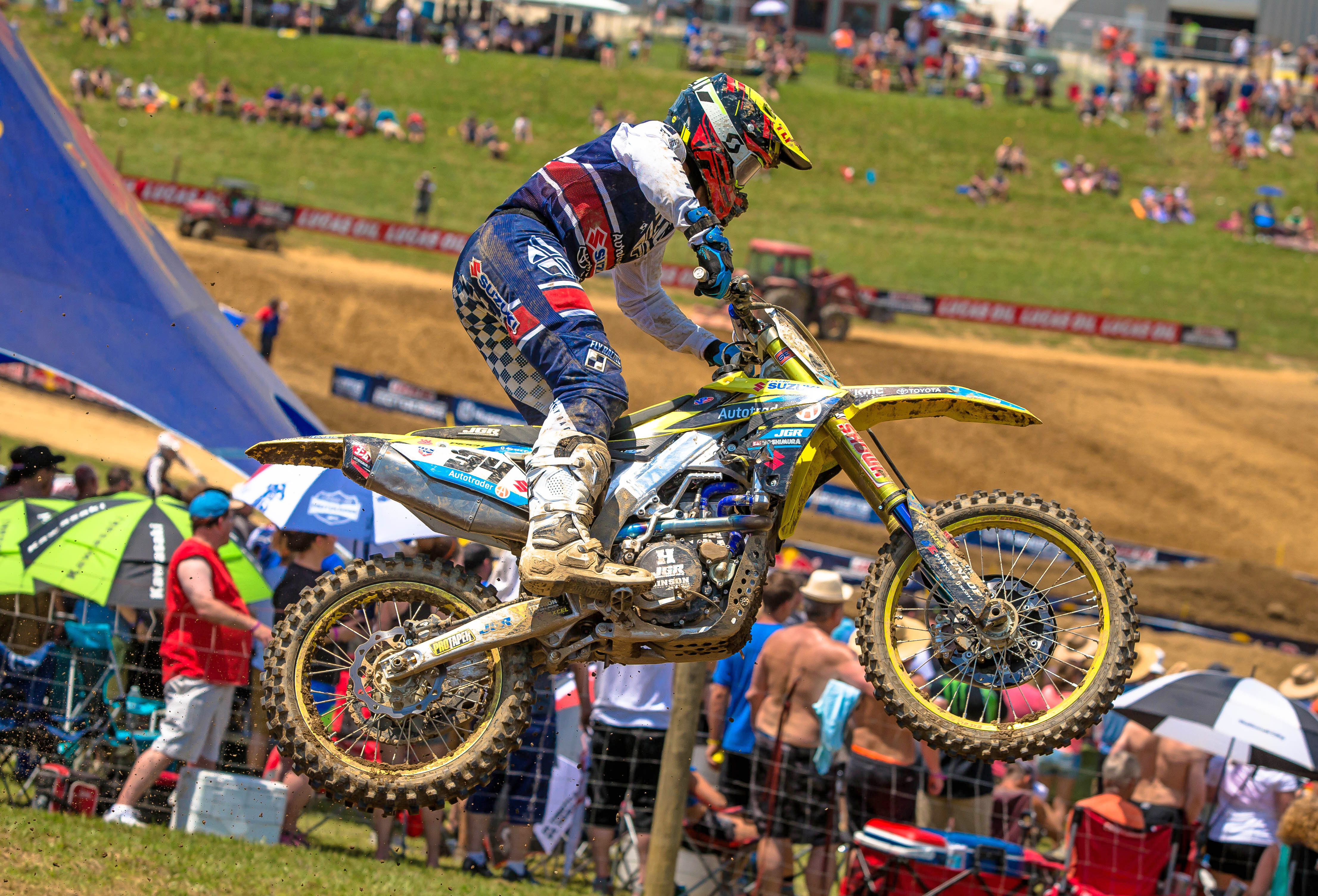 Weston Peick (34) continues to gain fans while impressing competitors with strong finishes on his RM-Z450.

Weston Peick [450 Class, 9-4 for 6th Place] – “High Point was up and down. Practice was pretty technical and the track was muddy. We went into the first moto with a couple of changes to the bike, and then I was involved in a first-turn pile-up. I had to come from about last to ninth place. For moto two we made a few more adjustments, and that made a big difference. I also got off to a better start and was able to work from up front. I’m looking forward to next weekend.” 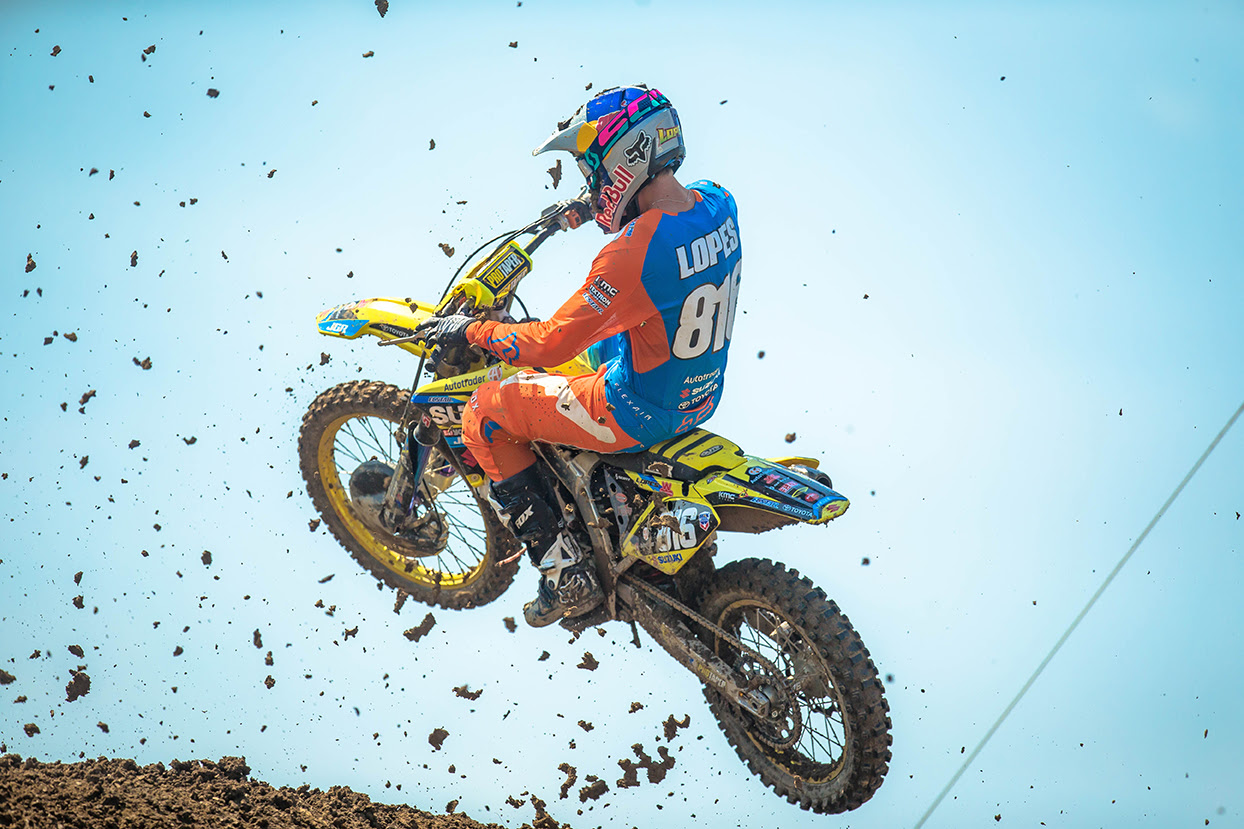 Impressive rookie Enzo Lopes (816) will need to take a break from his RM-Z250 to allow an unfortunate collar bone break to heal-up.
Enzo Lopes [250 Class, 20-39 for 25th Place] – “It was the craziest track I’ve ever ridden in my entire life. The ruts were deep and didn’t seem to end. I had a good start and was running third, but I got tight and went back to 11th. I had a crash, and then I crashed again and got my leg stuck under my bike. I had a decent start in the second moto, but I fell while going down one of the hills and had to stop. It turns out that I broke my collarbone, which is a heartbreak. I’ll give it some time to heal and be back as quickly as possible.”

Jeremy Albrecht [Team Manager] – “It was and up and down day. The 450 riders did well at High Point, but our 250 rider had a bad crash that will keep him out for a while. Enzo had a great start in the first moto and saw the pace of the front-runners, but he hasn’t been in that position yet and rode tight. Lopes had a good start in the second moto and was passing riders, but had a big get-off and fractured his collarbone. It will not require surgery, but he needs time to heal. I’ll have a better idea next week for when he will return to racing.”

“In the 450 class, Justin Hill had a really good first moto. He was charging forward and making good moves. I’m excited to see what Hill can do this weekend at Muddy Creek. As for Weston Peick, he rode extremely well in coming from a long way back in the first moto to ninth. In the second moto Weston rode the best I’ve ever seen him in the ruts. Both guys were pretty impressive.”

The 2018 Lucas Oil Pro Motocross Championship will continue this upcoming Saturday, June 23rd for the fifth round of the series. Held less than four hours away from the JGRMX race shop, the Muddy Creek National in Blountville, Tennessee is the closest National for the team.  Please visit www.jgrmxraceteam.com for more team news.